What Is A Whippet?

When it comes to versatility, the whippet takes the cake, serving as good as a companion dog as well as a racing dog. While they have enough energy to make them speedy competitors in the racetrack, they are also docile and quiet, content with simply lying around the house and sleeping.

Considered as miniature Greyhounds, the whippet has a lean and muscular build, making them favorites of people who own racing dogs.

The AKC has recognized the whippet as a hound (specifically a sighthound) in 1888.

Some of the characteristics that have been attributed to the whippet include:

The name whippet is derived from the expression “whip it”, a colloquial term which means “to move quickly”. The name of the dog is quite appropriate, given the speediness of the dog.

Whippets weren’t originally bred to be racing dogs. Instead, they were bred for hunting in England. While hunting dogs are known for their large builds because of equally large game, the whippet was bred to hunt rabbits. The breed was produced by the breeding of the Greyhound with terriers, which explains why these dogs look like miniature Greyhounds. Their speediness also made whippets a favorite of poachers, allowing them to hunt for rabbits and small game quickly and easily.

When the appeal of hunting eventually began to die down, whippets were brought to the racetrack, where they proved their athleticism and speed. The popularity of whippet racing made a lot of people dub the breed as the poor man’s Greyhound or even the poor man’s racehorse.

While the breed has been around since 1700s, whippets were only officially recognized by the English Kennel Club in 1891. The breed was eventually introduced to America by the English mill workers in Massachusetts, where whippet racing eventually became popular.

The AKC breed standard describes whippets as a combination of fitness and elegance, power and balance, and grace without a hint of coarseness. These dogs are able to move swiftly and cover great distances with an economy of movement. Able to cover 40 miles per hour, whippets are the fastest domesticated animal, equally speedy and powerful. Whippets should ideally have a symmetrical outline, with good muscular development and a powerful gait.

A medium-sized breed, the whippet can be identified by a well-muscled back and a long and arched neck. The head, while looking a bit small for the body, is also long and lean, with a long muzzle, dark eyes, and a dark nose. The front legs are straight, while the hind legs are muscular and long.

Whippets are as prized as house pets as they are as racing dogs. These are very affectionate and mild-mannered, requiring little care and content to be quiet around the house. While they may bark at strangers, they are usually friendly to people and other pets as long as they have become socialized well. They don’t have the characteristic doggy smile and do well around kids, as long as they aren’t treated roughly. They’re great even for those who live in apartments because of their gentle and quiet nature.

The whippet can live for 15 years on average, but they can easily go beyond that provided that they are well taken care of. 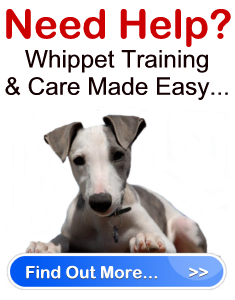